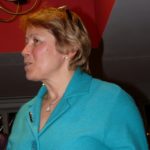 I recently completed my final project from the advanced “Speeches for Management” manual – delivering bad news.  Through the introduction by both the evaluator and the Toastmaster; I made sure the audience was aware that they were role playing. They were to be the workforce of a manufacturing plant in the UK, which was under threat of closure due to the US parent company considering relocating manufacturing to the States.  Below are the key lessons that I took from preparing and delivering the speech.

I had been concerned ahead of giving the speech that it would feel odd given that it was effectively a role play, but once I was in front of the audience I found it easier than I’d expected.  I actually enjoyed being in ‘role’.

Caroline Brewer completed her Advanced Silver Communicator with this speech.